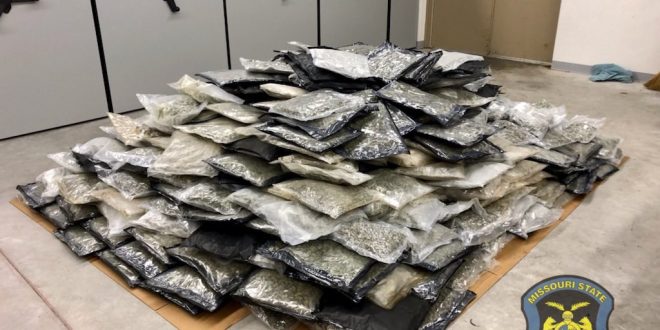 Missouri state troopers say it took more than one patrol car to transport the 500 pounds of marijuana to the evidence room (April 21, 2022 photo courtesy of Missouri Highway Patrol Troop F)

Callaway County prosecutors have charged two suspects with felony trafficking of drugs, after 500 pounds of packaged marijuana spilled onto I-70 during Wednesday’s crash east of Kingdom City.

The collision involved two semis and the suspects’ GMC. Missouri state troopers say both suspects are from the country of Mexico: Victor Gonzalez Acosta and David Mora Navarro are each charged with one felony. The crash closed the eastbound lanes near Williamsburg for several hours.

The crash happened after their GMC slammed into the back of a tractor trailer in heavy rain, before being struck by another tractor trailer. The Missouri Highway Patrol says there were so many packages of marijuana that it took more than one patrol vehicle to transport them to the evidence room.

Our news partner ABC-17 quotes Navarro as telling state troopers that they loaded up the drugs in Oregon and were heading to Pennsylvania. Troopers say the marijuana could be worth more than $1-million.

Previous Cyborg, Andrade headline an MMA weekend with the spotlight on women’s fights
Next The bold, steal-happy strategy making Florida a WCWS contender