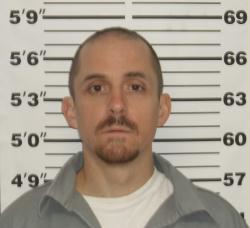 Charles Erickson is currently incarcerated at the Boonville Correctional Center, west of Columbia (2020 file photo is courtesy of the Missouri Department of Corrections)

UPDATE: Charles Erickson to be released from a Missouri prison in January

939 the Eagle News has confirmed that Missouri’s Probation and Parole Board has scheduled a January release date for Charles Erickson, the Columbia man who pleaded guilty to killing former “Columbia Daily Tribune” sports editor Kent Heitholt in 2001.

Erickson later recanted his testimony and has filed numerous court briefs, saying that his confession was coerced by police and that evidence shows he is innocent. Erickson pleaded guilty to second degree murder, robbery and armed criminal action in 2004, and is serving a 25-year prison sentence in Boonville. Missouri Department of Corrections (DOC) spokeswoman Karen Pojmann says Erickson arrived in prison in December 2005. He’s been in prison for more than 16 years.

Erickson testified against co-defendant Ryan Ferguson in 2005, but later recanted and testified that Ferguson was innocent. Missouri’s Western District Court of Appeals overturned Ferguson’s murder conviction in 2013, and Ferguson was freed. A federal judge ordered Columbia to pay Ryan Ferguson $10-million in damages because of civil rights violations.

None of the DNA from hair, blood and footprints at the crime scene matched Ferguson or Erickson.

Ms. Pojmann tells 939 the Eagle that the parole board met in November, and scheduled Erickson’s release for January.