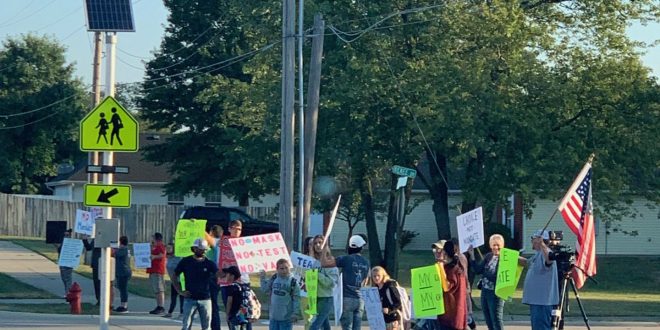 About 20 parents of Southern Boone elementary students protested against the school's mask requirement on September 17, 2021 (photo from 939 the Eagle listener)

About 20 parents of students at Southern Boone Elementary School in Ashland protested near the school Friday morning, against the district’s decision to impose a mask requirement.

Students at the school must wear a mask at school, effective today.

Southern Boone Superintendent Chris Felmlee has written a letter to parents saying that the elementary building has reached 15 percent of its population out, due to COVID-related positive cases and quarantines.

The district will re-examine the mask requirement on September 30.

As for Superintendent Felmlee, he says masks are encouraged but not required now at Southern Boone primary, middle and high schools.

(story updated at 11:20 am to include comment from Ashland parent Derek Lombard, who protested this morning)

Previous Conquering ‘our kryptonite’: Inside Lamar Jackson’s three hurdles to beating the Chiefs
Next NFL Week 2: 15 bold predictions, plus fantasy insight and keys to every matchup