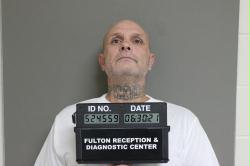 UPDATE: Moberly man who barricaded himself in house is a convicted killer

A convicted murderer with ties to Columbia who barricaded himself inside his Moberly home for more than 20 hours is now in custody.

ABC-17’s Kennedy Miller was outside the Moberly house during the standoff, and reports Thorp shot down a police drone sent into the home.

Online court records indicate the murder happened in 1993 in northeast Missouri’s Perry. The victim, Richard Gillenwater, disappeared and was later found with two shotgun blasts to the back of the head.

Missouri’s Probation and Parole Board will likely revoke Thorp’s parole. He’s expected to be returned to prison.

“Steven Thorp was a parole absconder, so it’s likely he would have been revoked to prison for the parole violation,” Missouri Department of Corrections (DOC) spokeswoman Karen Pojmann tells 939 the Eagle. “Now he faces new charges after yesterday’s events.”