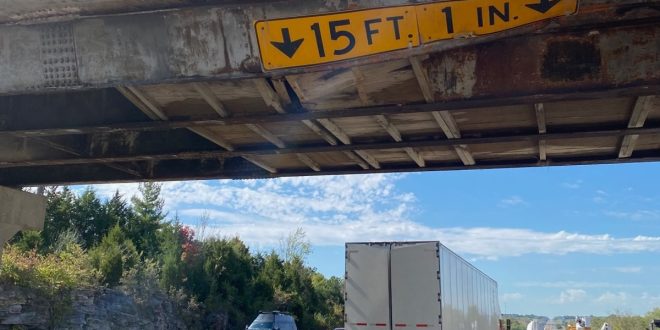 The state Department of Transportation (MoDOT) says there is significant damage to the Sorrels overpass over I-70, just west of Columbia. A waste management truck’s arms struck the overpass on Monday, causing major damage to the bridge’s underside.

MoDOT engineer Randy Aulbur briefed reporters near the bridge on Tuesday, saying it’s not safe for motorists to use the Sorrels overpass. He says crews are working hard.

“Provide in essence a wrap of the structure to contain any debris from falling onto traffic,” Aulbur says.

The passing lane of westbound I-70 remains closed near the Sorrels overpass, which was built in 1958. Aulbur says a demolition is planned, along with accelerating the bridge deck replacement.

MoDOT’s Aulbur says bids for the emergency project will go out this week.

“It’s a combination of replacement, rehab-type project, and really everything from the substructure up is scheduled to be replaced with this upcoming project,” says Aulbur.

MoDOT crews are currently securing the underside of the overpass, to protect westbound I-70 drivers from the possibility of falling debris.

Previous NextGen supporters hopeful new Columbia facility can cure cancer, dementia
Next UPDATE: Both lanes of westbound I-70 have re-opened at Sorrels overpass near Columbia