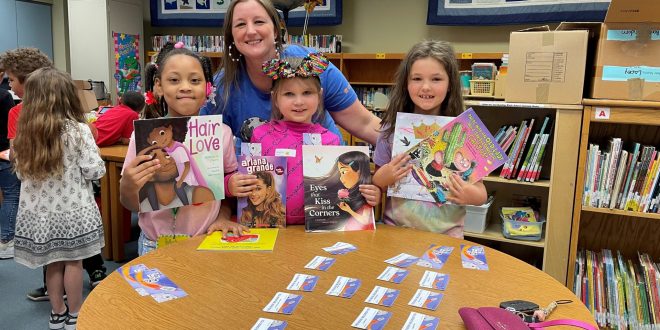 Children at Columbia's Shepard Boulevard elementary show the books they received during the May 24, 2022 book fair sponsored by VU (photo courtesy of Veterans United's Lois Kay and Kim Auzat)

All of the approximately 500 students at Columbia’s Shepard Boulevard elementary school have taken home two new books for the summer, thanks to Columbia-based Veterans United (VU).

VU’s foundation recently sponsored a two-day book fair at the school, drawing attention to the issue of book access for younger children. VU Foundation president Erik Morse says this is important for the foundation, saying they are stewards of 5,000 employees who give.

“So to know this is something very close to their hearts as well. And then to be able to take some pictures back and stories back and even names of some of the kids and say my mom and dad work at Veterans United. Or I know somebody that works there,” Morse tells 939 the Eagle News.

“It really connected for us just to see when you bring books to kids who want to read, and they want to be able to read and read with their family. And then tell them they get to have some of their own and that their names are going to be inside of them … it just blew their minds,” says Morse.

Some students got a book to bring home to a brother or sister. VU says the aim is to send students into summer with books that give them inspiration to read, learn and dream.

Previous U.S. marshals capture Columbia murder suspect in Las Vegas
Next CMSE has been hiring Columbia-area residents with disabilities for more than 50 years