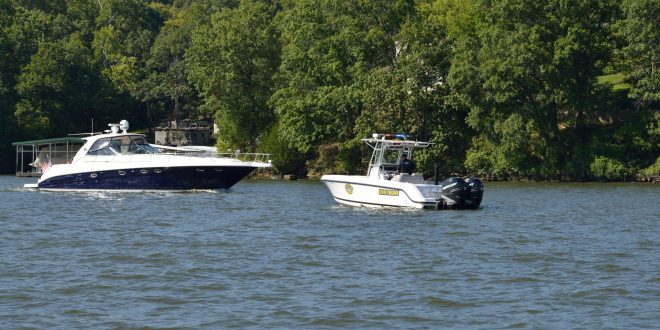 A Missouri state trooper patrols at the Lake of the Ozarks in 2022 (file photo courtesy of Missouri State Highway Patrol Lt. Eric Brown)

Weekend boating crash at Lake of the Ozarks kills one

A Kansas City man has been killed in a weekend boating accident at the Lake of the Ozarks.

Missouri state troopers say the incident happened at about 4:30 on Saturday afternoon at the 13-mile marker of the main channel, when a boat driven by a Kansas City man struck a wake … ejecting 29-year-old Daniel Cortez, an occupant. The Patrol’s crash report says Cortez was then struck by the vessel.

He was pronounced dead at the scene by the Camden County medical examiner at about 6 pm Saturday.

Firefighters from Lake Ozark and Osage Beach assisted state troopers at the scene.

Previous Man jailed without bond, after allegedly exposing himself multiple times in Columbia
Next Big turnout for Saturday’s Walk to Defeat ALS in Columbia