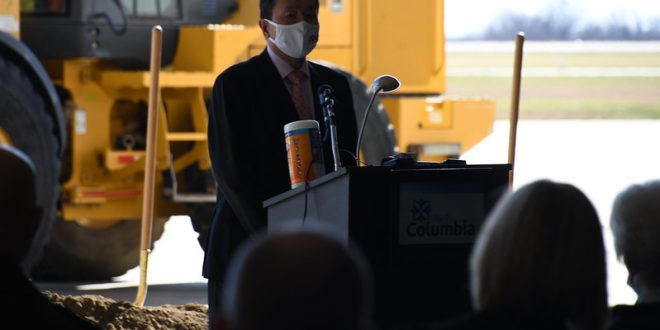 Columbia’s mayor is encouraging you to attend Wednesday’s grand opening and ribbon-cutting for the $23-million new terminal at Columbia Regional Airport (COU).

“Because we know it’s used as a recruitment tool. You know the University (of Missouri) right now with their Mizzou Forward Campaign that they have, trying to recruit like over 100 scientists and researchers and their teams to central Missouri, that’s the first thing they’re going to see. And so I want that to be a welcoming, forward-thinking environment,” Buffaloe says.

Wednesday afternoon’s ceremony begins at 3, and you’re asked to arrive by 2:45.

Columbia-area business leaders are excited about the new terminal, saying it represents the front door to our community and that it’s been 15 years in the making.

“Governor (Mike) Parson will be there welcoming everybody (on Wednesday). We’ll obviously have the Columbia mayor, myself, and the mayor from Jefferson City (Carrie Tergin) will be there. As well as individuals from the FAA (Federal Aviation Administration) and American Airlines. So really all the partners in this region coming together,” says Buffaloe.

You’ll be able to tour the new terminal, after the ceremony.

Jefferson City Mayor Tergin tells 939 the Eagle that many Jefferson City-area residents use COU, adding that the new terminal will boost economic development across the region.

The terminal’s main funding source is a hotel tax approved by Columbia voters in 2016.

Previous Flu/COVID vaccines to be offered Saturday in Fulton
Next UPDATE: Columbia murder victim has still not been positively identified