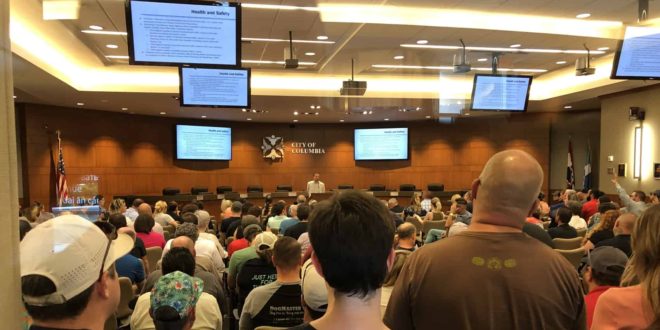 The public meeting on Monday afternoon led to dozens of concerns about the ordinance, which among other things does not allow discounts on drinks from 9 p.m. until closing time.

“This comes down to whether or not you have the choice to operate your business how you see fit,” Jesse Garcia, owner of Penguin Piano Bar and The Social Room, said on Wake Up Columbia. “Small businesses in Columbia are already suffering, and I don’t think the objective they’re going for would be reached by this method.”

Sixth Ward city councilwoman Betsy Peters told the crowd at city hall that the council requested the ordinance a couple years ago with a goal of trying to reduce underage drinking, and student binge drinking.

“We wanted public opinion and public input, so we’ve had it. I was sad to hear that we’ve not specifically talked to the bar owners, so I’m sure we’ll be doing that.”

The ordinance would not allow businesses to sell alcohol for less than what they paid for it at times. Bar owners like Garcia said they are concerned that could lead to time-consuming audits to make sure they stay in line.

“They want you to track every single ingredient in every beverage that you make down to the ounce, on every ingredient, and we have hundreds if not thousands of recipes that come through our doors on a daily basis. That would be pretty intrusive,” Garcia says.

Staffers say they will take feedback from Monday’s meeting and public comment period, and prepare a report for the city council. No vote is scheduled on the ordinance yet.

“This might come up soon, but probably not I wouldn’t think because we’re going to have to go back and look at this ordinance again and get some more input in it,” Councilwoman Peters said. “And I would like to ask the bar owners what they think that we should do and how they can help us keep their customers safe and decrease the amount of problems late at night.”