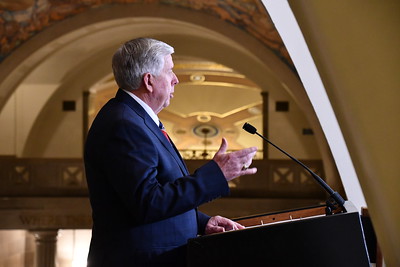 State health officials say an average of more than 15,000 COVID vaccine doses have been administered each day during the past week.

While he opposes mandates, Governor Mike Parson continues to encourage Missourians to get vaccinated.

The governor spoke at a recent Statehouse news conference, where Capitol reporters also asked about the 2022 session. It begins today at noon in Jefferson City.

The GOP governor still supports the gas tax approved by lawmakers in 2021, and says it was the right thing for Missouri to do. Legislation has been filed by GOP lawmakers in both chambers to repeal that gas tax.

“I think there’s been a lot of positive things behind that. So we’ll see what the Legislature does, but it’s way too early to predict what the legislative actions are going to be or what the end game will be on that,” says Parson.