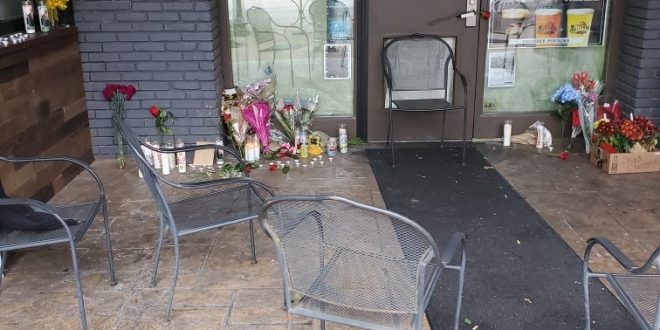 Flowers and other memorials such as St. Jude candles were placed outside J. Pfenny's in downtown Jefferson City, following Saturday morning's double homicide (November 27, 2022 photo from 939 the Eagle's Brian Hauswirth)

J. Pfenny’s is a few blocks from the Missouri Capitol.

Jefferson City Police say the incident began as a physical altercation between Thames and Davis, which resulted in a handgun being drawn. Detectives say Smock separated the two men and was escorting Thames out of the business. That’s when Davis began shooting, according to police. As a convicted felon, Davis is prohibited from having a firearm.

Jefferson City Police Lieutenant Dave Williams tells our news partner KMIZ that the 911 center was inundated with calls after the shooting. The police station is only a few blocks away, and officers arrived within a minute, according to Williams. JCPD officers describe their investigation as ongoing. Anyone with information is urged to call Crimestoppers at (573) 659-TIPS.