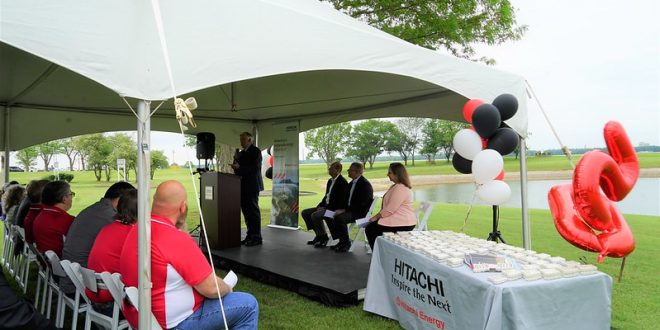 Missouri Governor Mike Parson speaks at the May 24, 2022 expansion announcement at Hitachi Energy in Jefferson City (photo courtesy of the governor's Flickr page)

One of mid-Missouri’s largest manufacturers has celebrated its 50th anniversary in Jefferson City by announcing a $10-million expansion.

“You’ve got a sign right out in front that you turn off the road (Highway 94) today. $21 an hour if you want to come to work here. That’s just pretty good for the state of Missouri when you walk into a company like Hitachi at $21 an hour,” Parson says.

The plant opened as Westinghouse in 1972 and later became ABB. Hitachi Energy employs 950 workers at the plant. The plant makes 200 transformers per day for companies like Facebook and Amazon.

Governor Parson says the expansion highlights the importance of his commitment to infrastructure and workforce development.

Hitachi vice president Steve McKinney joined the governor at the announcement. Mr. McKinney says as electricity emerges as the backbone of our entire energy system, more and more sectors of the economy depend on distribution transformers.

Previous No arrests in shooting on West Bellview, outside of Columbia
Next Columbia’s popular Tons of Trucks event is today