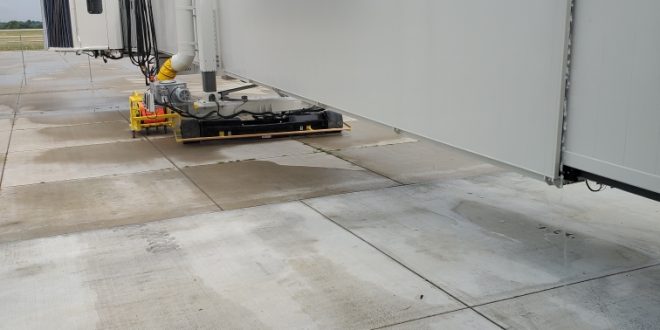 Many of them walked through the passenger boarding bridges. Airport manager Mike Parks predicts they’ll improve the airport experience for you.

The new 52,000 square foot terminal will also include a new restaurant, and negotiations are continuing between the city and a concessionaire.

Parks expects the new terminal to be completed in September. COU’s current terminal was built in 1968. Mr. Parks is proud of the new facility, saying it’s accessible for everyone.

“This is an airport everyone in mid-Missouri can use, but it’s also roomy. So when you walk in, you don’t feel so tight with others and so, we expect a lot of people to flying out of Columbia and into Columbia. However, you still have a lot of room to move around, and you’ll be comfortable while you’re here,” says Parks.

The new terminal’s main funding source is a hotel tax approved by Columbia voters in 2016. The new terminal will also include a mother’s room and a storm shelter, which will protect travelers and employees during tornadoes and other severe weather. Mid-Missourians who participated in Tuesday’s guided tour of the new terminal are praising the new storm shelter. It’s important to airport manager  Parks.

“It’s a rather large room so I don’t have an exact number on how many people in there. But it’s on the north end of the building, and so that’s just an area that we move everybody into and it’s easily accessible. And so that’s a great thing for the airport,” Parks says.