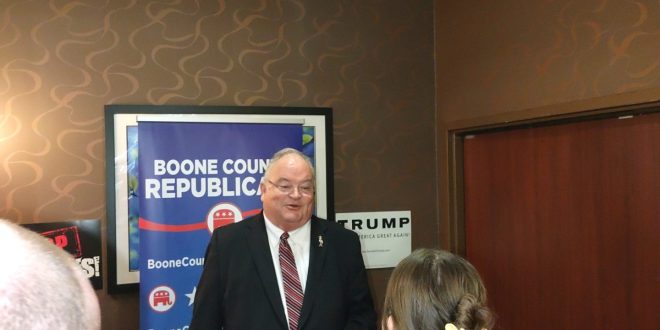 Missouri GOP congressman running for the U.S. Senate is focusing on grassroots efforts

An Ozarks congressman who’s seeking Missouri’s GOP U.S. Senate nomination says his campaign is going well and that he feels good about his team’s ground game.

U.S. Rep. Billy Long (R-Springfield) has been traveling across the state to speak at various Lincoln Day events, and was in Columbia Friday night. He spoke to 939 the Eagle.

“Now if you listen to my opponents they’re all trying to crush me and tell me that I should get out and that I’m going to come in seventh in a six-way race. But that’s exactly what they told me the first time when I ran for Congress,” Congressman Long says.

Long was an auctioneer and longtime KWTO radio host when he ran for Congress in southwest Missouri’s seventh district in 2010: he beat two state senators and a state representative in the primary that year. He’s now in his sixth term on Capitol Hill.

Long traveled to Mar-a-Lago in Palm Beach in November to meet with former President Donald Trump.

Congressman Long says if it comes down to money, he’ll lose. He tells 939 the Eagle that he continues to focus on Lincoln Days events to meet as many voters as possible. He also says his constituents in the Ozarks are pleased with his performance on Capitol Hill.

“I’ve got the most Republican primary voters of any congressional district. I got the highest raw vote total I ever received last November of 2020 and the highest percentage that I’d ever received,” says Long.

Previous The long road of Justyn Ross, from freshman phenom to serious injury and beyond
Next Wolves sign coach Finch to multiyear extension