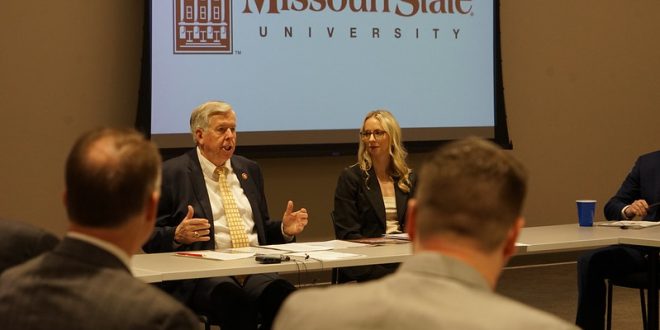 Missouri’s governor is reiterating his call for state lawmakers to increase the starting pay for teachers from $25,000 to $38,000. Governor Mike Parson spoke at Mizzou’s Friday education roundtable, before dozens of education leaders and several state lawmakers.

“We’re going to be competitive and we’re going to put that responsibility on the educators of this state. We’ve got to do a better job of taking care of them. We know that 50 percent of the teachers don’t even last five years, in that. We need stability in that,” Parson says.

State Department of Elementary and Secondary Education (DESE) spokeswoman Mallory McGowin tells 939 the Eagle that Missouri is now 50th in the nation in average starting teacher salary, at $32,970.

The governor is aware of that number, and highlighted it during his January State of the State address.

Per Missouri statute, the minimum teacher salary is currently $25,000.