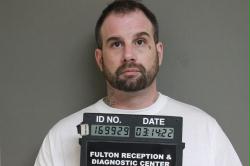 A parolee who’s charged with murder for a January overdose death in Moberly has been in-and-out of prison for the past decade.

939 the Eagle News has reviewed the extensive record of 41-year-old Dustin Pool, and we found that he first arrived in prison in 2011. He’s been paroled several times, and Moberly Police say he is now charged with second degree murder for the January overdose death that involved fentanyl.

Missouri’s Probation and Parole Board has revoked Pool’s parole again, and he’s incarcerated in Fulton. He’ll have to complete his seven-year prison sentence for drugs, and he faces the new murder charge as well.

Moberly Police have not released the name of the person who died in the overdose.

It’s unclear when Pool will be arraigned on the murder charge, and it’s also unclear whether or not he has an attorney.