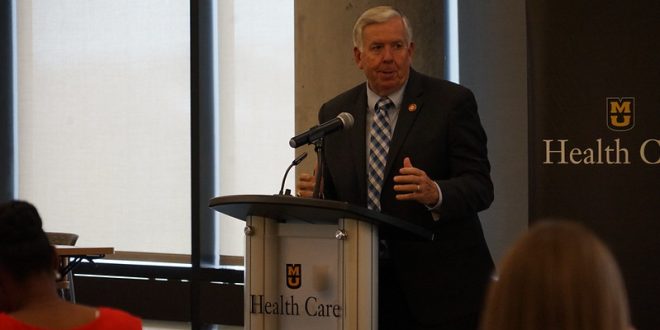 Parson: Record funding for tobacco cessation will be used to protect minors from illegal sales of tobacco

Missouri’s governor traveled to Columbia on Wednesday afternoon to announce the largest single investment into tobacco cessation in state history.

Governor Mike Parson (R) says the program is being increased from $50,000 to $2.5 million in general revenue. The governor says tobacco use is the leading cause of preventable disease and premature death in Missouri.

“What they’re doing here at MU and all the partners that were here today, to be able to put funding in place to really try to make prevention much more accessible to a lot of people all over the state of Missouri especially our youth to be here today and deliver that was a pretty special moment,” Parson says.

Governor Parson says 11,000 deaths are caused by smoking each year in Missouri. He spoke at Mizzou’s patient centered care learning center and was joined by MU Health Care physicians, health groups and students. Parson was also joined by former smoker Don Young, who smoked for more than 30 years before his voicebox had to be removed.

The governor also says the $2.5 million in funding will be used to develop programs to protect minors from illegal sales of tobacco products. Governor Parson revealed for the first time publicly that he is a former smoker, during his presentation to the audience. Parson tells 939 the Eagle it’s important for him to say that, and that he’s sending a message.

The governor says he gave up smoking after his first grandchild was born, because he didn’t want the infant to be around the smoke.