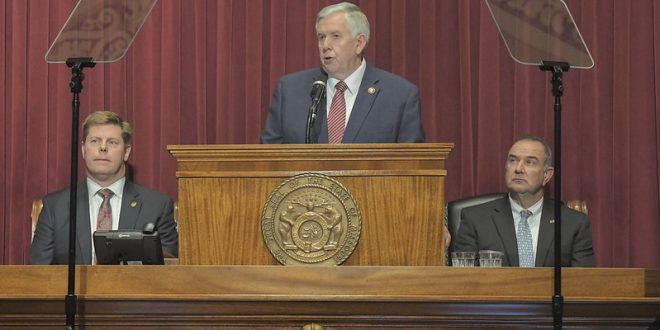 Missouri’s governor is calling on the Legislature to approve an immediate 8.7 percent cost of living adjustment (COLA) for state employees.

It was a major part of Governor Mike Parson’s (R) State of the State address, and it generated bipartisan applause from lawmakers. The governor wants it done and on his desk by March 1. Parson tells lawmakers that if we allow state government to fall behind, we allow Missourians to fall behind.

“With more than 7,000 positions open across state government, this wage increase is necessary and it is the minimum we must do. And on behalf of all state employees, I ask for your full support to pass this increase and deliver it to my desk by March 1,” Parson says.

The governor emphasizes that the pay increase is critical to remaining competitive with the marketplace. More than 14,000 state employees work in Cole County, making state government Jefferson City’s largest employer.

Governor Parson has also unveiled a plan to widen and rebuild I-70 across the state. Governor Parson says congestion, traffic crashes and delays have caused serious issues for I-70 motorists for years. The governor says Missouri can’t afford not to do this.

“This year, we are requesting $859-million, the largest investment in decades, to widen and rebuild the I-70 corridor and take the first steps in adding a third lane across our state,” says Parson.

I-70 is one of the busiest highways in Missouri, and Governor Parson says his plan would reduce traffic injuries and deaths. The state Department of Transportation (MoDOT) has said that congestion in St. Louis and Kansas City and along Interstates 70 and 44 in Missouri is causing an annual economic loss of $575-million.