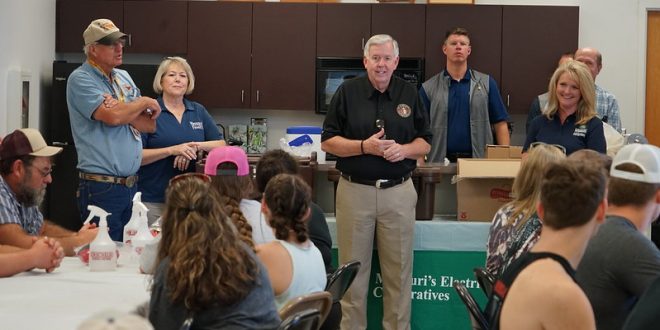 More than 1,000 people are expected to attend this (Thursday) morning’s governor’s ham breakfast at the state fair in west-central Missouri’s Sedalia.

Governor Mike Parson’s spokeswoman, Kelli Jones, tells 939 the Eagle that about 1,100 people are expected to attend the breakfast, which takes place at the director’s pavilion. Governor Parson predicts attendees will be upbeat, with cooler weather.

Many state senators and state representatives from both parties attend the breakfast, along with members of Missouri’s congressional delegation. Jones tells us they’re close to a sellout, which would be 1,100 tickets. Today is Governor’s, Legislators and Judges day at the state fair.

Governor Parson says farmers and ranchers across the state are being impacted by inflation. He spoke on 939 the Eagle’s “Wake Up Mid-Missouri.”

“You know we’re in the hay fields this year running three tractors. And you’re almost talking $400 to $500 a day to put diesel in those tractors. You talk about fertilizer prices that have tripled. Costs just getting parts, just feed (costs),” says Parson.

Previous MoDOT urges mid-Missourians to use caution near closed ramp in Jefferson City
Next Traffic is heavy near Mizzou campus. First Roar is Thursday evening