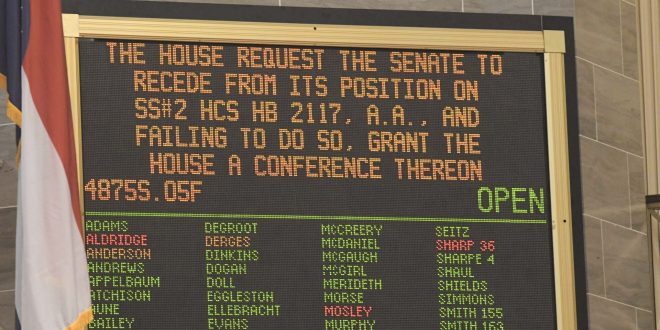 The Missouri House voted 131-17 for a bipartisan proposal to again request a conference committee with the Senate over congressional redistricting (March 31, 2022 photo courtesy of Tim Bommel at House Communications)

Missouri remains the only state in the nation that hasn’t approved a new congressional redistricting map.

State Rep. Dan Shaul (R-Imperial), who chairs the House Special Committee on Redistricting, tells House colleagues that the Senate has taken a take it or leave it approach.

“A 6-2 (Republican) map I thought was fair. We (the Missouri House) had to abide by the VRA (federal Voting Rights Act) on CD-1,” Shaul says.

The VRA is the federal Voting Rights Act of 1965, and CD-1 is Missouri’s First congressional district, which is currently represented by U.S. Rep. Cori Bush (D-St. Louis).

Missouri House members in both parties have criticized the Senate for splitting Columbia and Boone County into two congressional districts, in the Senate map.

“I asked several times why did they divide Marshfield, why did they cut Columbia? And guess what I’ve heard,” Shaul asked.

“Let me repeat what I’ve heard from them: I’ve heard nothing,” Shaul told her.

Missouri remains the only state in the nation that hasn’t approved a new map.