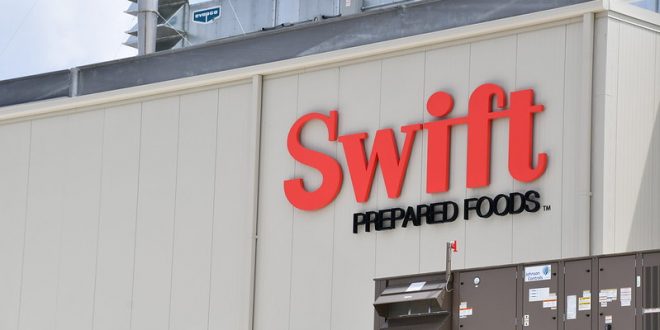 Swift Prepared Foods has a bacon plant in Moberly. It's also building one in Columbia (May 24, 2021 file photo courtesy of Missouri Governor Mike Parson's Flickr page)

Columbia’s city manager says Swift Foods will open its plant on Route B in early 2023, bringing more than 200 new jobs to the area.

“It’s something that the economic department has been working on for awhile. But when Swift comes in they’re going to be bringing in 250 new jobs, and that’s just exciting,” Seewood says.

Mr. Seewood tells 939 the Eagle that Swift Foods will be locating near the Nabisco plant. The jobs are expected to pay about $50,000 annually.

Seewood says it’s exciting news for the community and for job seekers.

“One of the things that we talk about in our community is there’s a lot of underemployed workers. And if we can find quality jobs for them, it’s just a benefit for the city,” says Seewood.

Swift Prepared Foods’ website describes the company as “at the intersection of heritage and innovation.” The company also operates a large bacon plant in Moberly, which is about 35 miles north of Columbia.