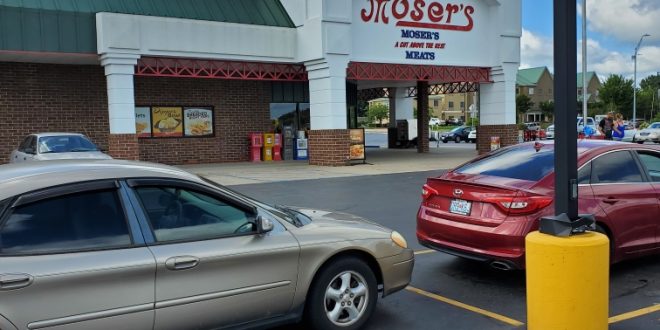 22-year-old Shavez Waage was shot to death in this Columbia Moser's parking lot (August 21, 2022 photo from 939 the Eagle's Brian Hauswirth)

Columbia Police have arrested two men for Saturday afternoon’s homicide in the parking lot of a busy Moser’s Foods on North Keene.

The murder happened at about 4:20 pm in the parking lot of Moser’s, which is across the street from a busy hotel and visible from heavily-traveled I-70.

The victim has been identified as 22-year-old Shavez Avieon Waage of Columbia. CPD officers tried to perform CPR on Mr. Waage, but he was already dead from gunshot wounds.

Columbia Police emphasize that the investigation is ongoing and that it’s being conducted by CPD’s criminal investigations division. CPD spokesman Christian Tabak spoke to ABC-17’s Marina Diaz during a live interview Saturday evening on our news partner KMIZ.

“Obviously (CPD) arrived on-scene, set up our perimeter. We can confirm that there’s no threat to the public at this point. We’re just still investigating and seeing what comes next,” Mr. Tabak told the television station Saturday evening.

Saying there was no threat to the general public indicated that the homicide wasn’t random. We’ll likely learn more details in court documents when Boone County prosecutors file criminal charges. That could happen on Monday.

Just last month, a man was shot in a busy Columbia Cracker Barrel restaurant parking lot in broad daylight. That Cracker Barrel is directly across I-70 from the Moser’s on Keene.