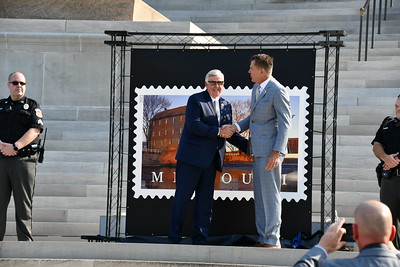 More than 1,000 people are expected to be in downtown Jefferson City for Saturday morning’s Bicentennial Inaugural parade, which begins at 10 outside the State Capitol.

About 100 entries will be in the parade, including the world-famous Budweiser Clydesdales, Marching Mizzou, Fort Leonard Wood’s 339th Army Band and the Tom and Becky Goodwill ambassadors from northeast Missouri’s Hannibal.

JC Penney’s 1947 Cadillac from northwest Missouri’s Hamilton will be in the parade, along with a float from Marceline, Missouri, which is the boyhood home of Walt Disney. The Negro Leagues Baseball Museum will also be represented.

The Bicentennial Inaugural parade will be livestreamed on Governor Parson’s Facebook page, with Ned Reynolds and KRCG’s Kermit Miller announcing.

After the parade, you’re invited to the Governor’s Mansion where the governor and First Lady will be hosting an ice cream social at 12:30 tomorrow. They’ll serve 1,000 free scoops of ice cream, courtesy of the Ice Cream Factory.