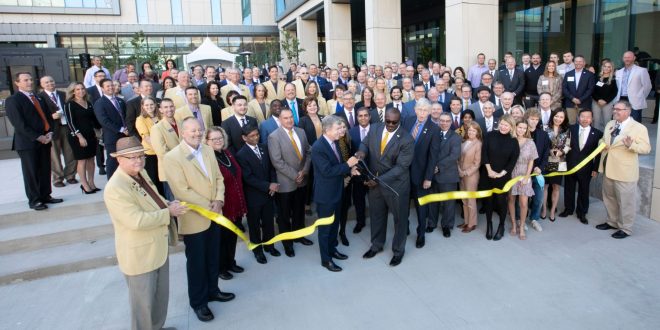 U.S. Sen. Roy Blunt, UM Board of Curators chair Darryl Chatman and other dignitaries cut the ribbon for the Roy Blunt NextGen Precision Health building on October 19, 2021 in Columbia (photo courtesy of University of Missouri)

Blunt: NextGen facility in Columbia will have $5.6 billion impact on Missouri’s economy

Missouri’s senior senator predicts the new NextGen Precision Health building in Columbia will provide personalized care to Missourians and will cement our place as a leader in biomedical research. The new building is named for U.S. Sen. Roy Blunt (R), who spoke to 939 the Eagle after this week’s grand opening celebration.

NextGen is located on the Mizzou campus. UM System President Dr. Mun Choi says with its opening, Mizzou now has all of the crucial elements to even better fulfill its mission of research, education and service to Missouri.

““And he’s a good friend of mine but he’s really one of the outstanding scientists in the history of the country, leading the human genome project. And it was that mapping of genetics, figuring out how to do that, that makes the whole concept of personalized medicine possible,” says Blunt.

Senator Blunt predicts that NextGen will have a $5.6 billion impact on Missouri’s economy over the next 25 years.