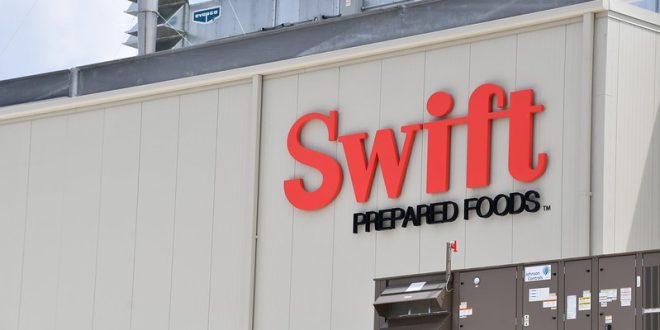 The sign outside Swift Foods' massive plant in Moberly. The Italian company is set to open its new $185-million Columbia plant this spring (May 24, 2021 file photo courtesy of the governor's Flickr page)

Columbia’s $185-million Swift Foods plant on Route B is expected to open this spring, and they’re still hiring.

The massive facility is 325,000 square feet, which is about the size of the former State Farm headquarters. Columbia-based Emery Sapp and Sons has helped build the plant. Emery Sapp and Sons vice president Brian Burks describes it as one heck of a plant.

“It is an impressive facility. If you haven’t driven by, you can’t miss it when you drive up Route B. It’s really cool, really neat,” Burks says.

“If you get off 63 and you’re heading northeast on Route B, it is just past where Como Smoke and Fire is, the old gas station. Before you get to the 3M plant,” says Burks.