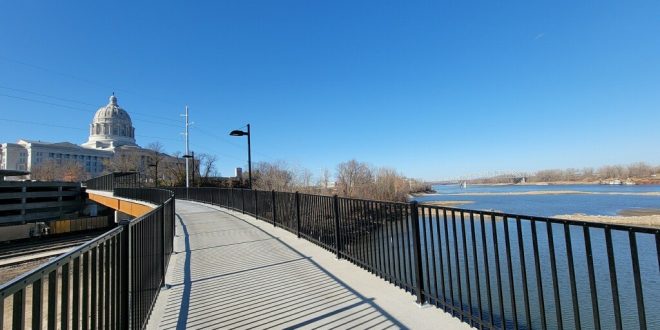 It’s been talked about in Jefferson City for more than 30 years, and it becomes a reality Monday afternoon.

Missouri Governor Mike Parson, Jefferson City Mayor Carrie Tergin and other dignitaries will cut the ribbon for the $4.9 million Bicentennial bridge at 1:30 pm. The public is invited.

The project will link the Missouri Capitol to the riverfront, specifically Adrian’s Island. Mayor Tergin describes the project as a “game changer.”

Major donors of the $4.9 million project will be recognized today, including the DeLong and Adrian families.

The 12-foot wide pedestrian and bicycle bridge will connect the Capitol to the island, which is north of the Union Pacific tracks. Ameren Missouri will also be recognized today: they moved electrical infrastructure and relocated poles to support the project.