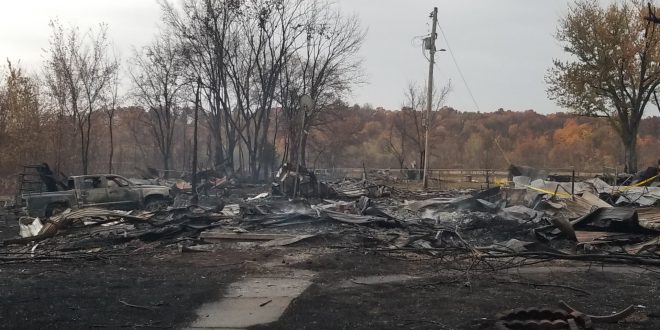 State Rep. Tim Taylor (R-Speed) tells 939 the Eagle’s “Wake Up Mid-Missouri” that there was a four-mile fire line going through the Missouri river bottoms near Wooldridge.

“When I got down there there was still houses standing, but the dryness and the wind volume and force and man it’s just hard to put into words. Those houses were gone in minutes,” Taylor says.

Cooper County Fire Protection District officials say the fire burned between 3,000 and 3,500 acres, damaging or destroying at least 23 structures in Wooldridge, which is southwest of Columbia. Representative Taylor says the fire spread quickly in the river bottoms.

“That stuff which may normally be a wetland, that stuff has been dry now for weeks and weeks. And so that particular area was just a tinderbox waiting to happen,” says Taylor.

Representative Taylor tells 939 the Eagle that everyone wants to help the Wooldridge area, adding that it’s still too early to know all of the needs. He says monetary donations are still needed for Wooldridge-area residents. He recommends donating through the American Red Cross or local churches, saying that’s the fastest way to get help to get help to those affected.