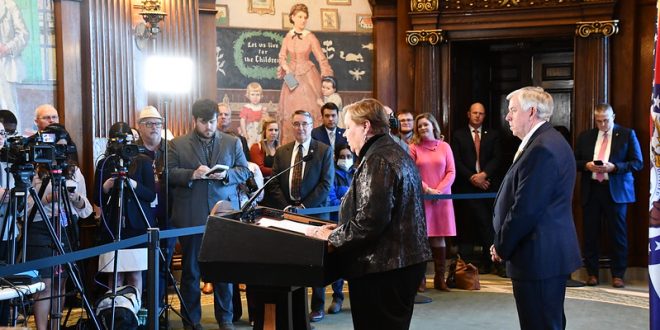 Governor Mike Parson has named Paula Nickelson of Fulton as the state Department of Health and Senior Services’ (DHSS) acting director. The governor made the announcement on Tuesday afternoon, in Jefferson City. He praises Nickelson, and tells Capitol reporters that he wants to bring stability to DHSS.

“Paula is not only a trusted voice within the department of her public health expertise, (and) is respected by public health partners all across the state,” Parson says.

Nickelson has worked for DHSS for more than 22 years, working in maternal-child health, chronic disease prevention and emergency preparedness.

She plans to focus on health equity and the state’s leading causes of morbidity and mortality. Ms. Nickelson tells Capitol reporters that she, her husband, three children and six grandchildren were born, raised and educated in Missouri.

She does not have to be confirmed by the Missouri Senate, as acting director. Former department director Donald Kauerauf resigned in February, after the Senate declined to confirm him to the post.