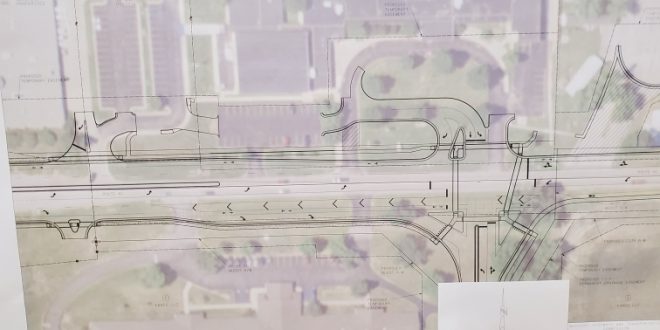 This is one of a dozen maps that MoDOT has created regarding the proposed Highway 63 and Grindstone Parkway project in Columbia (June 9, 2022 photo from 939 the Eagle's Brian Hauswirth)

About 75 to 80 people turned out for Thursday’s open house to see detailed maps of the proposed $9-million project to upgrade Columbia’s heavily-traveled Highway 63 and Grindstone Parkway interchange.

“I think people really see the benefit that’s going to come from the loop ramp and the added capacity. There have been some concerns, mostly on the bike paths and how they’re going to fit in,” Osman says.

Another key part of the project is widening Grindstone and New Haven through the stretch. MoDOT expects to award a bid in late 2023. Mr. Osman says the proposed loop ramp will improve traffic flow.

He says MoDOT has the funding for the project. Construction is expected to start in early 2024.