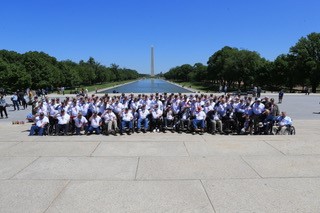 “It’s about healing, it’s about remembering and honoring. We all know that a lot of these veterans are carrying some really bad memories, particularly the Vietnam veterans the way they were treated when they came back,” Paulsell says.

95 veterans made the trip from Columbia to Washington, where they visited the World War II and Vietnam memorials. Paulsell says 376 motorcyclists escorted the veterans from Kingdom City back to Columbia, adding that Millersburg firefighters and Shryocks corn maze staff shot fireworks into the air, as the bus came home on Interstate 70.

Last week’s Honor Flight to Washington almost didn’t happen, because the airline they booked told them a few weeks before the flight that they didn’t have enough pilots. Mr. Paulsell tells 939 the Eagle’s “CEO Round Table” that he was worried, then sent an e-mail to someone he knows: the vice president of Southwest Airlines.

“I said we’re kind of in a bind here, I need a plane with pilots in about two weeks. And about a day-and-a-half later, we had a plane. These days, that’s not easy to do,” says Paulsell.

You can hear the full interview here.