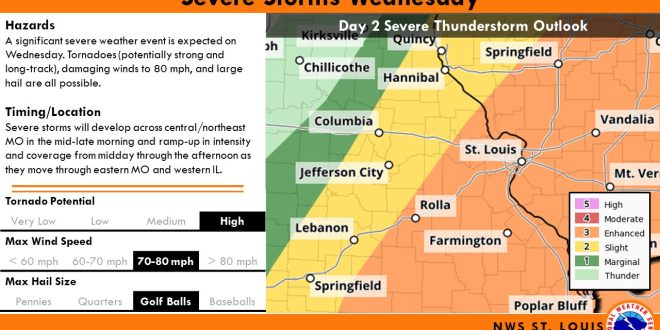 While weather will be calm today (Tuesday) across mid-Missouri, severe weather is possible during the overnight hours and again on Wednesday morning.

“Can’t rule out a tornado as the storms move in late Tuesday night, early Wednesday morning. It’s definitely not the most likely scenario but it’s also not a zero probability either,” Bowman says.

NWS Kansas City meteorologist Brent Pesel says the storms are expected to arrive in Sedalia, Columbia and Jefferson City at about 3 a.m., from about 3-5 am. He expects there to be a lull, and another round of severe weather is possible in Columbia and Jefferson City between 9 am and 1 pm on Wednesday. Pesel says damaging winds are the primary hazard. He also says isolated large mail is possible, along with an isolated tornado.

The NWS says there is an enhanced risk of severe weather tonight in the Kansas City metro and in northwest Missouri, including the I-29 and I-35 corridors.

Keep your radio tuned to 939 the Eagle for updated hourly forecast information, and keep fresh batteries with you. Mr. Bowman encourages you to have multiple ways to receive warnings overnight.

“So having a weather radio and backing that up with a cell phone app or some other way to get a warning to you so that it wakes you up in the middle of the night if there is hazardous weather that’s going to affect you,” says Bowman.

Previous UPDATE: Moberly man who barricaded himself in house is a convicted killer
Next (AUDIO): New Boone County Treasurer Dustin Stanton appears on “Wake Up Columbia”