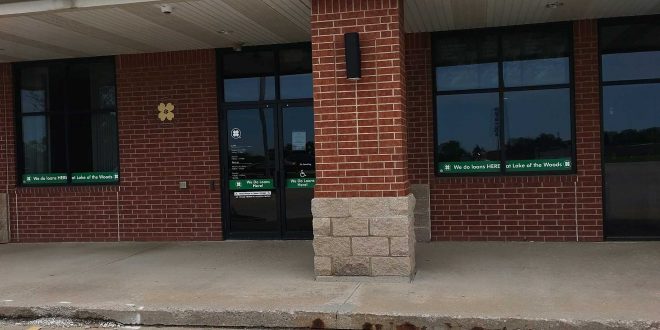 Central Bank of Boone County has 14 Columbia branches, including this one near I-70's Lake of the Woods exit (May 22, 2022 photo from 939 the Eagle's Brian Hauswirth)

Top Columbia banker: we’ve seen no indication yet of a recession

The president of Columbia’s largest bank says there is no indication yet of a recession.

Central Bank of Boone County president Ed Scavone addressed the issue this weekend on 939 the Eagle’s “CEO Round Table.” He does say that rising costs are scary to people.

“I just paid $4.50 a gallon yesterday to fill up my vehicle. And so, that’s going to affect people, and you start seeing food prices go up. And so, that affects a lot of individuals,” Scavone tells host Fred Parry.

Scavone says if there is a recession, we wouldn’t see it for six months or so.

Central Bank of Boone County is Columbia’s largest bank, with more than one-third of the market share. Scavone says their market share here is between 35 and 40 percent, with $3-billion in assets. Central Bank’s overall assets are about $20-billion. The bank has 14 Columbia branches and 372 local employees.

“So we’re the third-largest bank by asset size. Central Bank in Jefferson City is $3.6 billion and then our Central Bank of the Midwest in Kansas City is $3.7 (billion). So we’re close in size there, and we’re just lucky to have a great community,” says Scavone.

Central Bank of Boone County has opened a mortgage office in Des Moines, about 220 miles away. Mr. Scavone says things are going well with the new office, due to growth in Des Moines.

“A lot of technology and people coming from the coasts to that area. So (a) really hot market,” Scavone says.

U-S News and World Report released a report last week, which places Des Moines 14th out of the 150 largest cities for best places to live.

Click here to listen to the full interview between Fred Parry and Mr. Scavone.