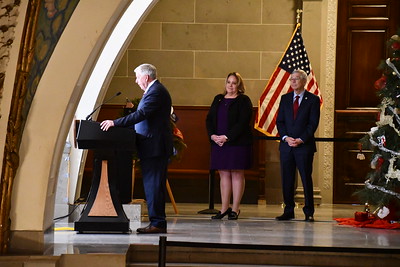 “Deliver of support and treatment has been much harder over the last two years. The men and the women who do this work have continued to deliver high-quality care during the pandemic and an ongoing workforce shortage across the system, that started well before the pandemic,” Huhn tells reporters.

Meantime, the governor tapped a longtime state lawmaker to lead DOR. Rep. Wallingford chairs the powerful House Ways and Means Committee. He’s served in the Legislature since 2013. Wallingford has also worked for the McDonald’s and Taco Bell corporations.

“Working for the two largest restaurant corporations in the world where customer service is king, customer service is also king in the (state) Department of Revenue. And we look forward to working with everyone over there to make sure that we have a world-class organization,” Wallingford says.

Wallingford served in the Missouri Senate from 2013-2020, before being elected to the House again. DOR primarily is involved with state tax returns and with renewing license plates.