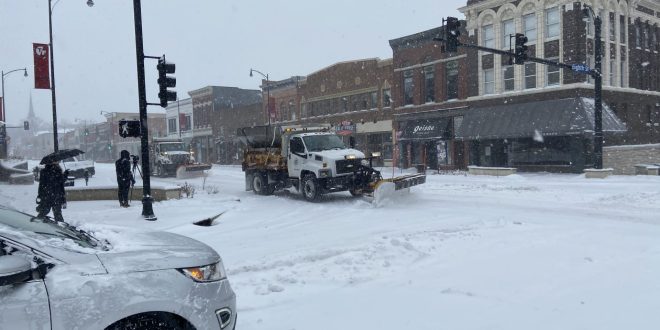 About ten inches of snow have fallen in Columbia, since the winter storm began. National Weather Service (NWS) St. Louis meteorologist Mark Fuchs tells 939 the Eagle that 9.9 inches of snow fell during the storm, which began late Tuesday night with frozen precipitation.

The winter storm warning has expired. Columbia received about 2.6 inches of snow between midnight and 10 this (Thursday) morning.

The NWS in St. Louis says 7.2 inches of snow fell in Columbia on Wednesday, setting a daily snowfall record for February 2 in Columbia.

Meantime, a 51-person Columbia Public Works crew has been out in force since 7 this morning, primarily plowing and treating first, second and third priority roads.

Plow drivers are being assisted by city employees from Parks and Recreation and Water and Light. Once those priority routes are rendered passable by a front-wheel drive vehicle, plow drivers will begin to treat residential roads.

Public Works crews are encouraging you to stay off the road, to give crews the time and space they need to plow.

Columbia’s bus services have been canceled for today.

Previous Who are the most underrated players in fantasy basketball this season?
Next New allegations levied against Snyder at hearing